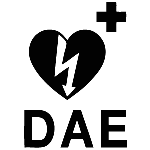 Allow your citizens to easily locate the nearest defibrillator, but also to report a defective defibrillator.

The defibrillators feature geolocates the nearest defibrillators, present in or around the city. Citizens are sensitized and mobilized. They report a defective defibrillator, participate in the mapping of tools that will save their lives or that of their loved ones.

Less than 3% of citizens know the location of defibrillators

Each year, about 50 000 French die prematurely from cardiac arrest, more than half of them in extra-hospital settings and more than 800 athletes *. Or about a cardiac arrest every 10 minutes: ten times more than killed on the road. Things are moving: the new legislation that has allowed every citizen since May 2007 to use a déﬁbrillateur has prompted several hundred local communities to equip themselves and to train the population in first aid actions. Three simple gestures make all the difference: Call 911, massage, Déﬁbriller. 3 gestures that can save a life. To do this, residents need to be informed about the location of DAE for the most efficient and fastest use possible when needed. In fact, according to a study in 2013, less than 3% of people know the location of defibrillators.

More than 45% of defibrillators would be out of use

The mobile application Mymairie makes available to the community a new simple feature to geo-locate defibrillators with a MSDS that indicates the exact address, with a photo, informs if the DAE is outside or The interior with the possibility to add the opening hours of the building. So every citizen, can know in real time the location of the defibrillator closest to him. In view of another disturbing figure: more than 45% of the défrillateurs would be out of use *, Mymairie has enriched its service with an “alert” function. Thus, the citizen can, via the application, alert the service of his town hall 24h/24, 7d/7 of a malfunction found. The town hall is then informed in real time and can take the necessary measures to ensure the safety of its inhabitants.