According to an EU report, the European mobile applications sector is expected to represent by 2018 63 billion euros compared to 17.5 billion in 2015, a 360% increase in only three small years. The number of jobs created would be multiplied by 2.7 and would reach 4.8 million against 1.8 million now.

According to Médiamétrie, in the last quarter of 2014 France had 30 million of users, or more than half of the French population aged over 11 years.

Regarding operating systems, in January 2015, Android totals 63% of market share with an increase of 7%. Windows Phone earns 2% and stands at 9%. After already losing 4 points last year, IOS still yields a bit of ground at 21% (-1% over 1 year).

3 million, this is the number of applications available on the blinds.

1.3 million for Google Play store, both in the Apple store and 300 000 in Windows Phone store; Numbers that continue to increase every day.

According to Flurry Analytics, the use of mobile applications increased by 76% in 2014. Games, social networks and dating are the most used applications. 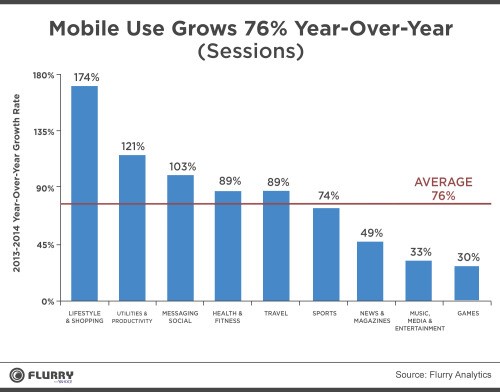 In France in 2012, 22% of users installed one application per week on their smartphone. Today, according to Harris Interactive, they would only be 15%, despite the increasing supply.
Of the 35 applications installed on average, only 11 are used per week and 12 are never. 41% of users in désintallent at least 1 per month.

If the number of applications downloaded and used decreases, the time devoted to them on the other hand, explodes. In 2011, a user spent an average of 18 h18/month on his apps. In 2013, he conscares 30h15 ‘, or 80% of the time spent on his mobile. Today, this figure has risen by 6% further.

The time spent on mobiles has become higher than that spent in front of television!

Free applications are the great favorites of users. They accounted for 91% of downloads in 2013. They will probably reach 94.5% in 2017 (Gartner study).

In-App purchases have more than quadrupled in four years.

While users promote free applications, more and more are increasingly fuelling the revenue generated by the in-App, which is expected to reach 48% of the sector’s overall revenues in 2017, while capping at 11% in 2013.